Getting A Mortgage About To Become Harder ☹️🏡🏦 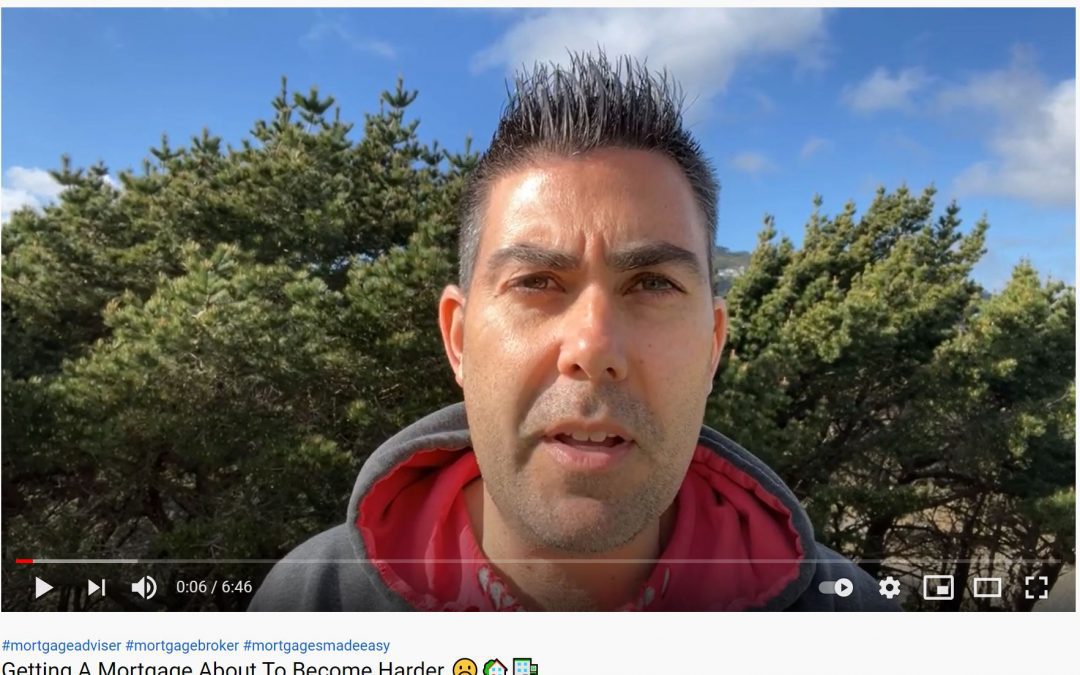 Getting A Mortgage About To Become Harder ☹️🏡🏦

In this video I give a brief explanation of the proposed changes the Reserve Bank is about to impose on the banks.

Unfortunately, this will make it harder for first home buyers and investors to get a mortgage.

I’d love to talk to you about your finance and mortgage needs!

More about the benefits of using a Mortgage Broker here: https://www.michaelmortgageman.co.nz/why-should-you-use-a-mortgage-broker/

Just thought I’d just jump online and just share the news with everyone that the Reserve Bank is about to start making mortgages harder, actually.

So maybe I should change my tagline, Mortgages Made Easy, Reserve Bank Making Mortgages Harder. So they’ve announced that they’re going to start consulting with the banks to look to reduce the amount of high loans that they’re issuing from…

Basically making it harder for people that don’t have a 20% deposit. So we don’t get all these deposits confused, I just going to put it in simple terms. The banks are allowed at currently to lend 20% of their total loan book to people without a 20% deposit.

So if the banks have a hundred million dollars to lend out, they can lend up to $20 million of that to people without a 20% deposit. So then it’s people with a minimum deposit of 10% up to 19.99% you can qualify to have part of that $20 million pool.

The Reserve Bank is looking to have that to 10%, so the banks will only be able to lend out after 10% of their loan book to people without a 20% deposit.

Look, a lot of clients, I think the numbers are nearly up to between 38, 40% somewhere around there, that’s the percentage of first home buyers that are buying properties without a 20% deposit, so it’s quite high.

So if you extrapolate that it’ll be half of those people would have been locked out of the market.

Now last time this happened, the banks were very cautious with their lending and how much they were lending, and in some cases they would only lend to people that had their income deposited with that bank for the last six months, and if they had a live signed and dated sell and purchase agreement.

So it was very hard to get a pre-approval from the banks last time this happened. So that’s first home buyers, the Reserve Bank is also going to consult on debt to income ratios for investors.

So what’s a debt to income ratio?

So debt to income means, if you’re an investor and let’s say earn a hundred thousand dollars a year, the debt to income ratio may be that you can’t borrow more than five times your income.

So if you earn a hundred thousand a year, the rules will be that you can’t borrow more than 500,000. Now, if you’re already an existing investor with a loan on your own house and 100% loan on another property, your income’s not going to be enough to match these new debt to income ratios.

So what the government and the Reserve Bank are doing, is they’re now really attacking the demand side of the property market.

So they haven’t been able to address the supply side because we just can’t build houses quick enough in New Zealand, they’ve tried with their key rebuild and things, it’s not saying that they’re giving up on it, but we just can’t build houses fast enough for the demand so they’re now attacking the demand by bringing in these new rules, and these rules will have an impact.

So that’s why it’s a bit sad from my perspective, because what will happen?

There’ll be a frenzy now just like last time there was a frenzy when rules changed, people that have an existing pre-approval, the banks will honor those, but they will expire.

Some of them will expire, there’ll be expiring within a few days, some within a few weeks and some up to three months time.

So what that will do, is it’ll bring forward a buying frenzy.

And what happens in those situations?

So if you’ve been looking to sell a property or waiting to sell, I can tell you right now, bring it forward.

Don’t wait to spring, speak to a real estate agent and get that property on the market now, because you’re going to get a lot of interest, a lot of inquiries.

So now is definitely the time to sell if you’ve been thinking of selling, and if you’ve got a 10% deposit and you’re worried about these changes, again, look to buy sooner rather than later, because it’s only going to get harder. So definitely speak to a mortgage advisor like myself and an expert to make sure you’re getting the right advice.

Look, I’m not saying this to scare anyone.

But if you just see what’s happening, mortgages are going to get made harder, credit is going to tighten up a lot and the banks are going to be very careful who they lend to, and basically you’re going to have to have a pretty good squeaky clean application.

So what does that mean?

New Zealand citizens, a good credit history, jeez, maybe minimum 10% deposit, but ideally you’re going to have to have a 20% deposit and your income needs to be strong enough to service the mortgage.

And that’s criteria is going to be the same for investors as well. So look, we will hear more about it in the media in the coming days, I’ll probably do more videos as we get more information.

This is a consultation period, but being here in Wellington I know what consultation means, these things will be rolled out come October.

And look, the banks have been calling for changes for our techs on the demand side for a while now. And if I think back to earlier in the year, the big banks were the first to move on changing their loan to value ratio rules, they didn’t wait for the Reserve Bank, they attacked it themselves.

So this will impact the demand side of things a lot. So there you are guys, hopefully this video was useful.

Hi to everyone watching by the way, do me a favor, press that like button, press that share button because the more people that can see the sort of content during these times of uncertainty, the best it is for us all. I’m going to sign off guys, have a great afternoon and may God keep blessing our beautiful country.